This is probably not the worst example of a procurement initiative gone bad, but it just might be the most interesting. This true story takes place in Pioche, Nevada, a small town 180 miles northeast of Las Vegas. It is best known for its silver-mining roots. It also had a reputation for being rough and wild. According to one tour guide, “This town made Deadwood and Tombstone look like kindergarten” (Abbott). In an 1873 report to the Legislature, the Nevada state mineralogist said this about his visit: “About one-half of the community are thieves, scoundrels and murderers, and then we have some of the best folks in the world…You can go uptown and get shot very easily if you choose, or you can live peacefully” (Milliard). The local Chamber newspaper reports that guns were the only law and that 75 men were buried in the cemetery before anyone in Pioche had time to die a natural death. “Nearly 60 percent of the homicides reported in Nevada during 1871-1872 took place in and around Pioche” (Pioche, Baddest).

In 1871, Pioche became the Lincoln county seat and construction of a courthouse immediately commenced. The construction contract went to Edward Donohue with a payment of $16,400. For $10,000, John Steel designed a jail for behind the courthouse. Due to design alterations, poor management, construction mistakes, and corruption (or “graft” as one travel writer puts it) the contract “was broken.” Individual contractors were hired to finish the work. The two buildings, when completed in 1872, cost $75,000 (Lincoln County Courthouse).

The Las Vegas Review Journal does a nice job explaining how the courthouse got its nickname, The Million Dollar Courthouse:

To finance the project, county commissioners issued scrips — certificates of indebtedness — at an unusually high interest rate, according to the National Register of Historic Places. Then the mines fell on hard times and tax revenue plummeted, forcing the commissioners to issue more scrips and take on more debt that continued to build over the years. The 1871 courthouse wasn’t paid off until 1938, two years after the deteriorating structure had been condemned. By then, the total cost was estimated at $800,000, earning the courthouse its popular nickname (Milliard).

Most of the descriptions of how the courthouse came to be so expensive state that the contract awarded to Edward Donohue was dissolved or broken by officials. So, what really happened with the contract? The Reno Gazette-Journal reports that the county commissioners allowed, three times in the initial phase, additional money to Donohue (in addition to repairs and changes that were needed to be made several times). The article (Earl) goes on to state:

Donohue broke his contract and absconded with the profits. County officials had the courthouse completed on a piece-meal basis. Water, at a cost of 75 cents a gallon, was provided for mixing mortar. Stone, supposedly imported from Scotland, was sold to builders at exorbitant prices while crude stone steps cost several hundred dollars each. Interior lamps cost the county $45 each…

If you are ever in Pioche, the courthouse is open for tours and wonderful storytelling is provided by the guides. They are locals who know Pioche’s history well and love to share stories. 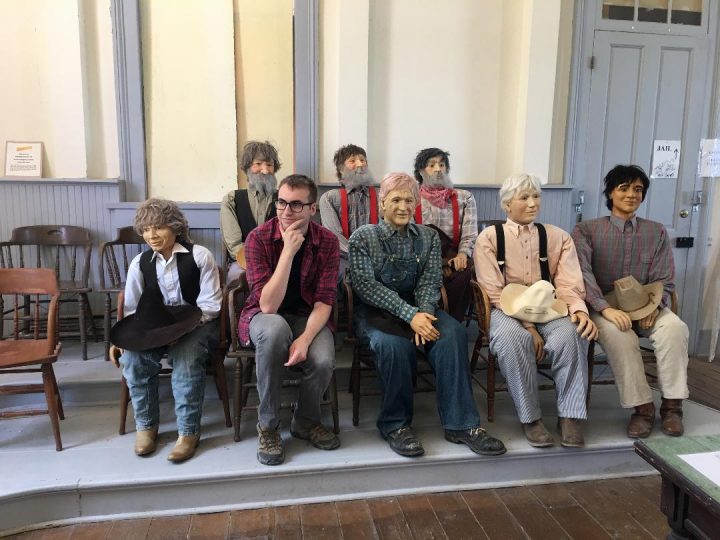 My son, Ben, sitting with fellow jurors at the courthouse.