In an opening message to readers of Clarivate Analytics’ The State of Innovation 2017 report, CEO Jay Nadler writes about the insights revealed, most notably the removal of industry boundaries. “Looking at the 12 industries highlighted in this report, one thing you’ll notice is how industry boundaries are being removed. Where the telecom industry used to focus only on smaller, sleeker phones, we now see phone apps controlling the temperature in our home air conditioning or alarm systems. Similarly, we see kitchen appliances in the home appliance (‘domotics’) industry crossing boundaries into technology, where the Internet of Things allows them to ‘communicate’ with each other and save energy.”

Clarivate Analytics is a provider of highly respected scientific research databases and analytic products. An analytical approach based on proprietary data sources was used for the report. Scientific literature was used to “highlight early signals emerging from scientific discovery” and patent information identified which ideas are taken up. Web of Science, Derwent World Patents Index, Derwent Innovation and Cortellis were the key products used.

Why This Report is Valuable

The report looks at 12 major industries and focuses on a specific subsectors within each. 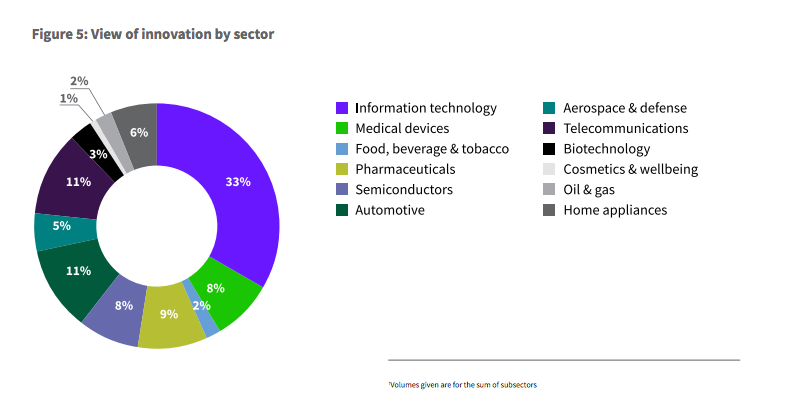 For the automotive sector, the special report on self driving cars and innovation covers who is doing what, including collaborations that are forming and trends that are emerging. The report starts with: “Google has been involved since the start in 2009 and has a head start over the competition due to amassing hundreds of patents covering the technologies required for autonomous driving, including a LiDAR device mounted on a car (US8836922B1), nearby aggressive driving behavior detection (US20140236414A1) and autonomous driving mode (dis)engagement (US20170043788A1).”  It closes with: “One thing is for sure: as vehicles become more autonomous and ‘connected’ they will become potentially life-changing. Your artificial intelligent IoT (Internet of Things) Connected Autonomous Vehicle (CAV) could pick you up on request, sense your mood or physical condition and react accordingly, even share your physiological data with your remote ‘connected’ doctor. Your CAV could help you work or relax on your journey before dropping you off at your destination. It could then go and park itself or go off and act as a car share, earning you some extra income until you tell it to come back.”

There are charts on subsector innovation. An example: 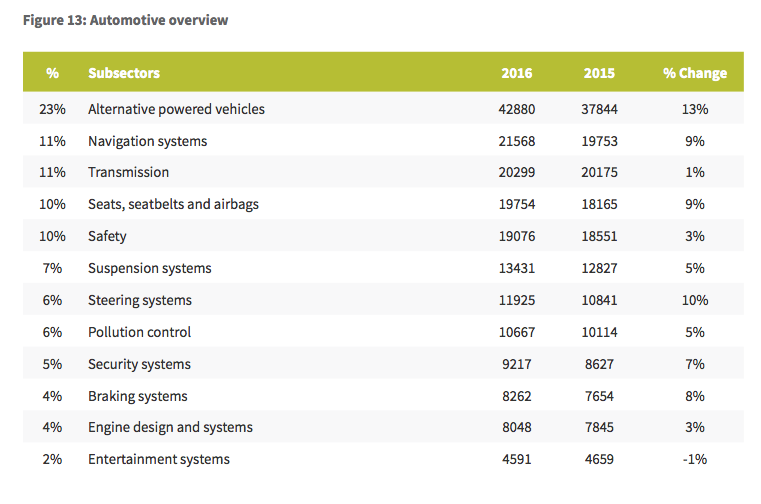 Lists are provided for each top ten global, Europe, and Asia and top alternative-powered vehicle innovators along with the most prolific scientific research organizations in automotive.

Interesting Quotes From the Overall Report

The mix of materials in aerospace will continue to change in coming years with composites, freshly machineable metals and new metals increasingly occupying the space of traditional materials. The industry continues to march toward components of lighter weights, increased strengths and greater heat and corrosion resistance. — Michael Standridge, Aerospace industry specialist at Sandvik Coromant

Driven by legal and consumer pressure, reformulation of skincare and cosmetics will increase dramatically over the next few years: market leaders in this sector will be those finding the balance between cosmetic effectiveness and environmental awareness. As development accelerates and compositions become more environmentally friendly, biopolymer and naturally derived alternatives will soon be as ubiquitous as the polluting plastic microbeads they replace. — Peta Leggatt, Technology and Policy Expert, Clarivate Analytics

We’re able to make ‘meat’ by combining the main protein found in wheat berries with fresh produce items like mushrooms, carrots, and onions. We achieve so many flavors without using any food additives or glutamates like MSG or autolyzed yeast extract. — Ryan Echaus, Atlas Meat-Free Deli