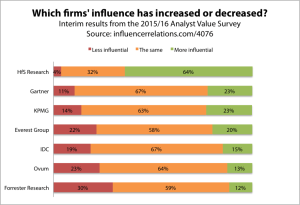 Duncan Chapple, writing for Influencer Relations, (Early Surprises in the 2015/16 Analyst Value Survey), reports on strong trends being seen as the survey is now past the half way mark. The Analyst Value Survey  is a public survey that delves into how “professionals value different analyst firms like Gartner, Forrester and around 100 of their most successful competitors.” From the post:

The most striking trend is the growth of the market, especially on the end-user side. Much of this growth is squeezing traditional analysts firms, which face not only freemium upstarts like HfS and 451, but also business consultancies like KPMG (which bought EquaTerra) and Deloitte (which owns Bersin). Both of those firms are being used much more widely, and we’re interested to see what will happen with Prophet’s Altimeter.